Ever since I first watching my old brother play Asteroids in a cafe near to our school , I’ve always been drawn (in a straight line 🙂 ) to vector based arcade games such as Omega Race, Lunar Lander, Battlezone and Star Wars of course…it’s just something about those intense glowing lines moving incredibly smoothly against a darkened backdrop. To a much younger me, vector graphics were a symbol of the future. Today, they symbolise retro and boy do I love my retro.

As such, I’m a Vectrex player and alongside emulation with Mame/AAE I’m always seeking out all forms of vector styled games be it new concepts or remakes of original arcade classics. One developer that’s been releasing some truly outstanding games over the past few years is Sokurah of Tardis Remakes.

Rip Off – Sadly, I never came across Rip-Off in the arcades as it’s one of my favourites on my Vectrex. Sokurah’s release is such a joy to play and looks amazing with those digital backdrops.

Star Castle – Another arcade/Vectrex classic. Check out the Atari 2600 port if you haven’t already.

Black Widow – A brilliant remake of Atari’s dual stick shooter (even more so than the original I think) and plays incredibly well when setup with a PC dual stick controller.

Zektor – It’s like Omega Race, Rip-off, Star Castle and Asteroids all in one game! Again, another machine that I didn’t come across in the arcades although I fear my pocket money would not have lasted very long if I had.

Space Fury – Intense Schmup action which gets even better (see below)

Arcadia – A vector styled re ‘imagine’-ation (sorry!) of an early 8-bit hit. I spent many happy hours playing this way back then on my humble Vic-20 , and this new version is just as fun and looks amazing with all that neon glow.

….and finally, his latest game, Space Rawks which is based around Asteroids Deluxe but with a shed load more rocks, plenty of power ups and frequent visits from those pesky saucers.

Just look at those gridlines…heaven 🙂 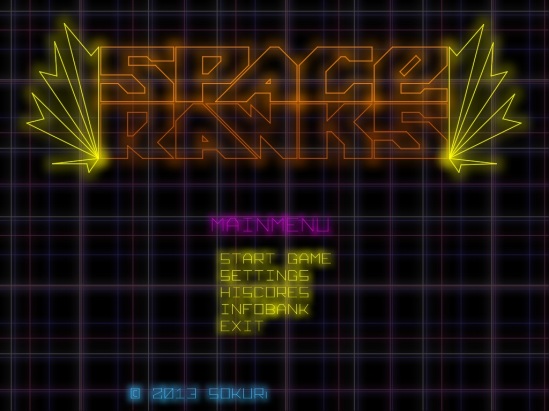 As with previous games, you’ll find plenty of useful options including redefinable controls and the ability to jack up (or down) the amount of vector glow. 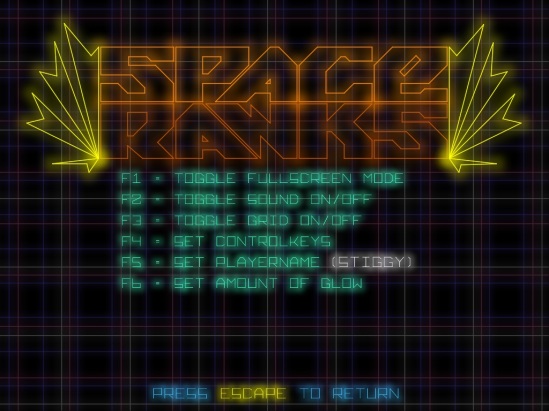 ‘Sir, the possibilities of successfully navigating an asteroid field are 3,720 to 1’. I’d say, twice that judging by my score!

I didn’t think that playing these game could get any better but man, how wrong was I after transferred them over to my arcade machine.

Classic controls and extra bass from the wooden cabinet.

Space Fury – Of all the games I’m tried, this one plays so well on an upright cab and feels just like a genuine coin-op arcade game from the 80’s. 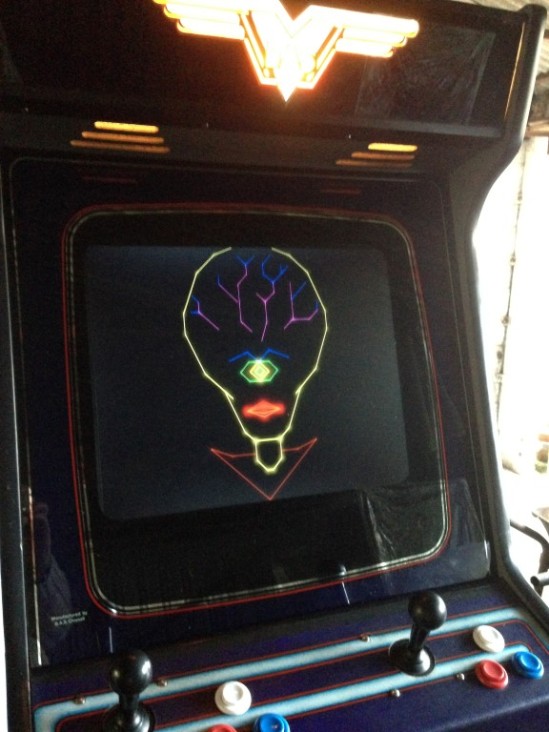 Following on from my previous post re dual controls for Battlezone, I was driving home from work one evening thinking about how I could go about creating a (very) simple dual joystick control system that would let me play Battlezone the way it was meant to be played. Ideally I want to use proper old school joysticks reminiscent of BattleZone and other arcade games rather than simply using a modern USB dual thumbstick type affair.

I had two type of joystick in mind here and both are from the 80’s – either the Cheetah 125 or the Quikshot II. Both are black flight sticks with bright red fire buttons and both are smooth and silent having leaf switch contacts as opposed to clicks micro switches.

Two problems – Firstly, I only have one of each type of Joystick and although they look very similar they don’t match. Secondly, both sticks are old fashioned 9-pin type joysticks used on early computers like the Commodore 64 so if I intend to plug them into my netbook I’m going to need some sort of USB adaptor.

The first problem was easily solved, a quick chat with Andy at the Retro Computer Museum last week and he’s lent we two matching Cheetah joysticks for my little experiment.

The second problem, could have turned into another larger project itself if it wasn’t for the fact that I already owned what I needed to get the joysticks converted to USB.

You might recall this wonderful bit of kit from my previous posts about my Commodore 64 ITX PC project, this is the Keyrah interface board which is designed to connect a whole range of classic commodore keyboards and convert them into a modern USB keyboard. for use USB. It also sports two 9-pin joystick ports that can convert older joysticks as key presses on modern PC’s.

The first thing I wanted to try out was replicating the dual stick converted edition of BattleZone on the Atari 2600. Here i’ve used Atari 2600 emulator called Stella and mapped the various controls for each stick.

Although the game isn’t the best looking version of Battlezone, the twin joystick setup worked perfectly and although I’m setup in the kitchen, got on step closer to ‘real’ Battlezone.

Next up is the dual stick retro classic Robotron to see how this setup performs when the action heats up. I’ve decided to use the C64 port using Vice64, again mapping both joystick controls.

Again, it worked perfectly without lag or any issue when two joystick movements where performed at the same time. 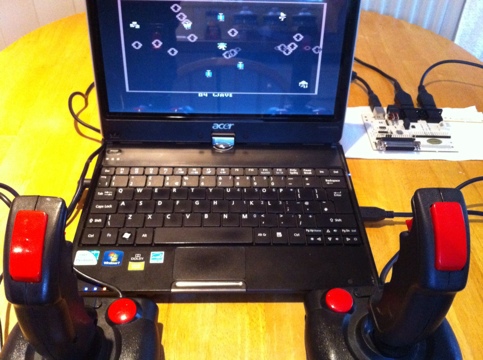 Of course, what I really wanted to try was the arcade version of Battlezone, so with MAME fired up , tank buster StiGGy was on the war path. 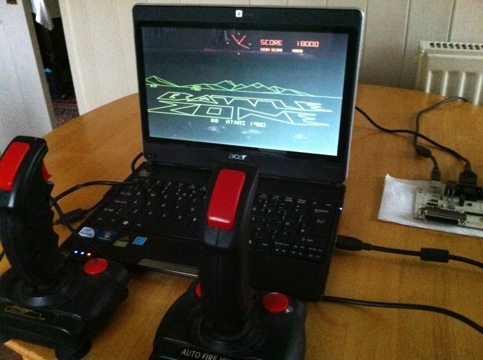 With the dual controls it totally transforms the game back to how it was invented to be played.

A couple of other games I played via MAME was Total Carnage and Smash TV, the latter being such a joy to play again after all these years of playing it with one joystick and keyboard 😦

Does anyone have any other dual stick game recommendations?

Here’s a few vids I’ve shot with the setup in action. Hopefully the iphone footage isn’t too wobbly this time thanks to my camera tripod and a huge dollop of blu-tack 🙂

Does anyone have any other dual stick game recommendations?

My next job is to wrap up the setup in a DIY case. I’m going for the no frills, one step up from the kitchen table option here and have already got something in mind using something I fished out of the scrap pile at work.

I’ll be back with more soon.